Oil prices have soared in recent months, fueled by the Russian-Ukrainian war, and are hovering just above $100 a barrel. You can see from the chart that oil recently hit its highest level in over a decade. This week, I look at the performance of equities given high oil prices and after similar spikes. 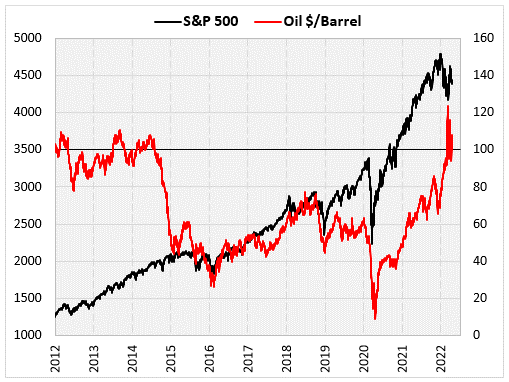 The first time oil jumped into triple digits was in 2008. The charts below show the performance of the S&P 500 (SPX) index over the next three months and one year, based on of the price of oil. High oil prices have been nothing short of a disaster. The S&P 500 posted an average loss of 3.4% over the next three months, with less than half of the positive returns. Over the following year, the index recorded an average loss of 2.1%, with 66% of the returns positive. Otherwise, the index averaged double-digit gains, with 75% of the returns positive. Cheap oil led to the most bullish returns. When oil was below $50 a barrel, the SPX gained more than 20% on average, with 94% of the returns positive. 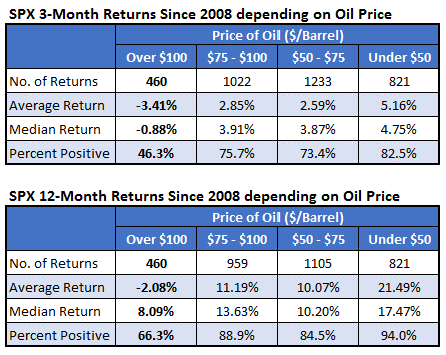 The results above are skewed by the crash of 2008-2009. Oil was over $100 just before this crash. If I change the period and only show returns after 2010, I get the data below. In the first chart, which shows returns over the next three months, there is always underperformance when oil was above $100. The returns are not negative at least. One-year returns show a respectable average return of 11.4%, with an impressive 97% positive returns. 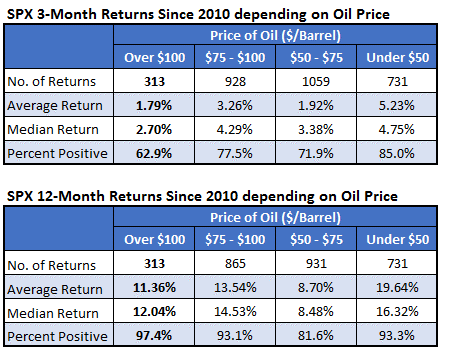 Above, I looked at the returns of the S&P 500 as a function of the level of oil prices. Then I look at the oil price spikes. Specifically, I look at the performance of the broad market index after oil peaks of 50% over a four-month period (I consider only one signal every six months). There have been 10 peaks like this since 1989. The first chart below shows the returns after these peaks (the recent peak was over a month ago, so there is one more return in this timeframe). For comparison, the second chart shows typical stock market returns since then. Peak oil doesn’t seem to have much effect on stocks going forward. Returns after Peak Oil are similar to returns you would expect at any time since 1989. 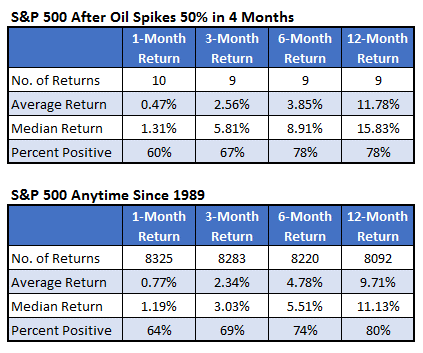 For the curious, the individual returns after the spikes are in the table below. As you can see, the recent signal occurred on March 8th and the SPX has gained over 7% in the month since then. The last four events led to double-digit returns over the next year. The recent signal was the only time there was a 50% spike in four months over $100, so we don’t have another data point combining the two ways I’ve analyzed this. 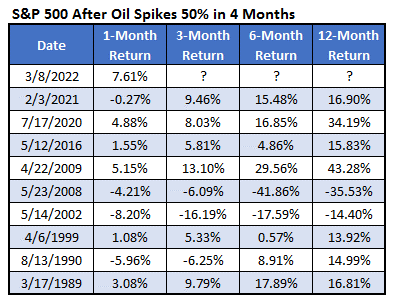