Oil Price Alert: InnerCircle Members will receive the next private placement information letter on Wednesday of next week. Access a secret world of wealth and receive our free 50-page private equity white paper by register today.

Chart of the week 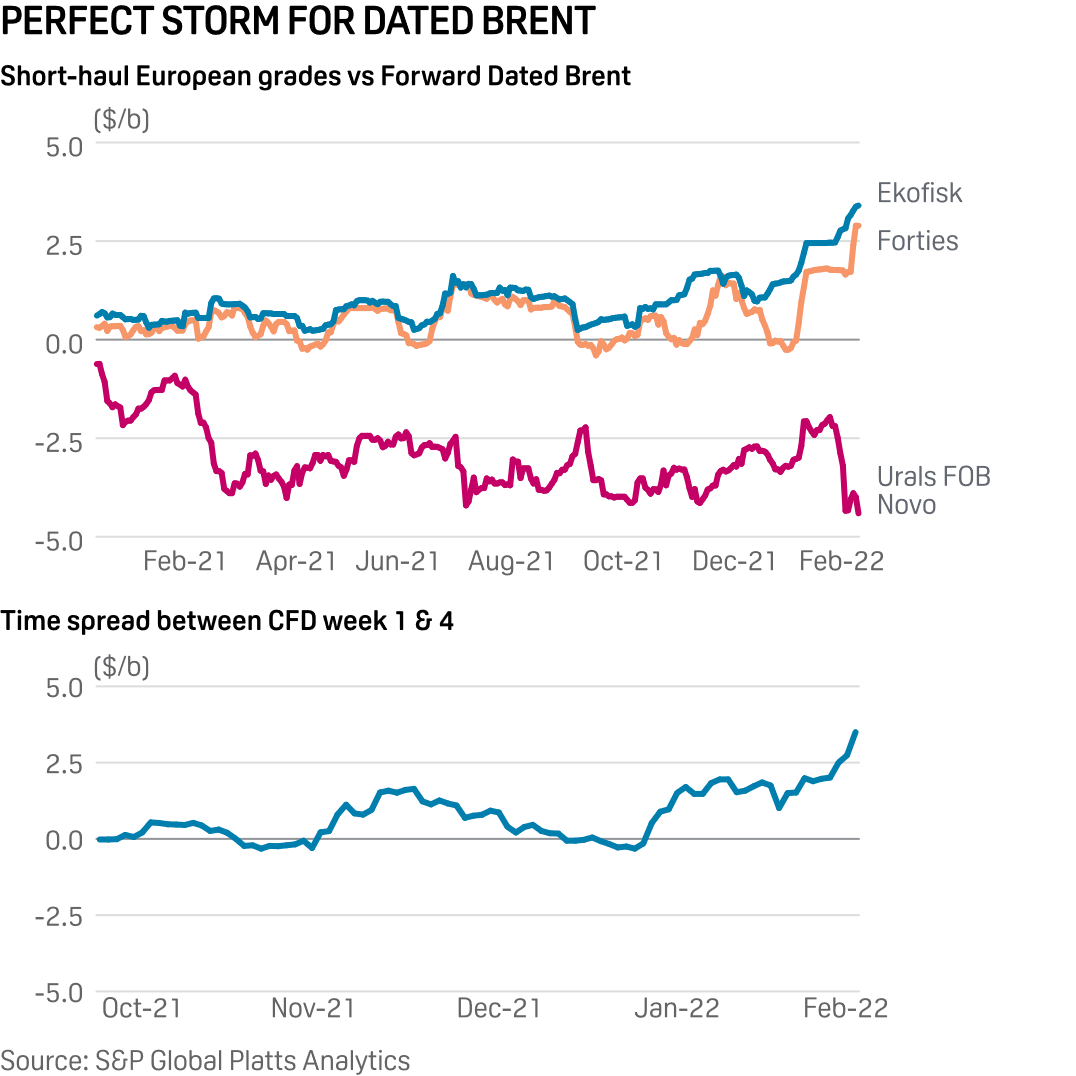 – The price differential between Brent spot valuations such as Dated Brent and exchange-traded Brent ICE reached an all-time high of $5 a barrel amid ongoing geopolitical concerns.

– The ICE Brent pullback also reflects the unprecedented tightness in oil markets at the moment, with the M1-M3 spread between March and May 22 contracts trading as high as $4 a barrel.

– While refiners would naturally deplete end-of-year stocks, current levels of backlog make it impossible to replenish stocks as stockpiling inevitably leads to losses.

– While Russia’s benchmark Urals fell to their weakest level in more than a year due to sanctions fears and weak desulfurization margins, premiums for Ekofisk and Forties grades from the sea of North soared.

– Global trader Glencore (LON:GLEN) will set aside $1.5 billion for corruption and market manipulation investigations that it expects to solve during this year.

– American oil company Conoco Phillips (NYSE: COP) was considering selling its Permian Basin acreage located mostly in the Delaware region, worth more than $1 billion, as it seeks to reduce its assets after buying out Shell’s US assets.

– Major based in UK Shell (NYSE:RDS.A) is preparing to launch the sale of its gas assets in the southern North Sea, some of which have been under development since the 1960s, and hopes to raise $1 billion from the transaction.

Oil prices nearly hit the $100-a-barrel threshold on Monday as fears of supply disruptions grew on reports that Russia could invade Ukraine. At its peak, the forward run in the futures market was so steep that the Brent M1-M2 spread exceeded $2 a barrel – the last time markets saw such a gap between spot and futures valuations dates back to 1993. The end of the ensuing Russian military exercise on the Ukrainian border eased concerns somewhat, returning Brent to the lower 90s. Yet the market is still struggling to find a good bearish story to believe in – OECD inventories remain unprecedentedly tight and OPEC+ appears reluctant to increase production, just as windfall revenues have begun to roll in. .

The White House proposes a suspension of the gasoline tax. According to the media reportsthe White House is considering a temporary halt to federal gasoline taxes — which currently stand at 18.4 cents a gallon — to help offset rising fuel prices at the pump.

India is facing a new coal shortage. With coal remaining the best-performing hydrocarbon of 2022 so far, its prices could rise further as Indian smelters, textile mills and fertilizer makers all complained about a burning shortage of coal, as power generators use up most of the supplies.

Total’s $27 billion deal with Iraq has stalled. The largest Iraqi energy contract of the last decade, TotalEnergies’ (NYSE: TTE) four major oil, gas and renewable energy projects totaling $27 billion, would have stalled as the protracted approval process in Iraqi ministries led Baghdad to reconsider the terms of the deal.

The EU puts Gazprom under the magnifying glass. European Union antitrust regulators expected to step up pressure on Russia Gazprom (MCX:GAZP) to see if the gas giant has withheld additional gas supplies to drive up regional gas prices.

China is increasing its efficiency targets. Chinese authorities have raised energy efficiency benchmarks for its most energy-intensive industries, tightening expectations for aluminum, copper and zinc smelters, their energy consumption accounting for nearly 9% of the country’s total.

Exxon is launching a second project in Guyana. American oil major ExxonMobil (NYSE:XOM) started production of the second phase of the Liza deepwater field off the coast of French Guiana, bringing the country’s total production capacity to 340,000 bpd.

The EIA expects a Permian record in March. The US Energy Information Administration waits that oil production in the Permian Basin will increase by 70,000 bpd to a record high of 5.2 million bpd in March, despite well productivity falling to its lowest since August 2020.

Alberta wants to reduce emissions from the oil sands. The Alberta government is working to tighten emission standards for oil sands mines, the most carbon-emitting upstream projects in the world, because Canadian producers can so far choose the benchmarking of their emissions.

Corn-based ethanol is worse for the climate than gasoline, study finds. A recent American scholar to study found that corn-based ethanol, a key component of the fuel blend, had a 24% higher carbon intensity than gasoline due to emissions from land use changes for crow, provoking the ire of the ethanol trade lobby.

France suffers another nuclear setback. While French power group EDF (EDF) has had arguably the worst winter this century so far, Paris has seen another nuclear – Bugey 3 – Sign out due to a surprise connection, bringing the total capacity to 15 GW, or a quarter of the country’s production.

Exxon could be late to Brazil Day. Despite 4 billion spent on drilling rights, allowing the American oil majors ExxonMobil (NYSE:XOM) to become the second-largest holder of offshore acreage in Brazil, the company has yet to report a commercial oil discovery while it still considers the country one of its highest-quality growth areas.

Platts wants WTI Midland in Brent ratings. S&P Global Dishes indicated it would seek to add WTI Midland to its assessment of oil benchmark Dated Brent, converted to a virtual North Sea fob base to keep the global benchmark in line with other BFOET grades, although the oil market is still split on the need to include non-North Sea crudes.

Metals soar on Russian-Ukrainian fears. Along with crude prices, aluminum and nickel prices Pink to multi-year highs amid fears a potential conflict could reduce Russian supply and deepen existing shortages, with the former hovering around $3,340 per metric ton, near historic highs.

By Josh Owens for Oilprice.com