Russia has its best year since the Soviet Union
Russia’s oil production hit a post-Soviet high last year, according to a Reuters report. Production averaged 10.58 million barrels per day last year, up 0.7% due to contributions from small non-state producers. As the following chart shows, Russia’s daily oil production has steadily increased over the past few years as investment has poured into the country’s oil sector due to high prices and open opportunity. 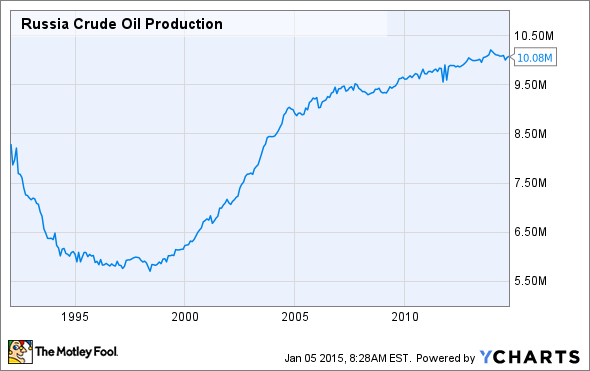 Data on crude oil production in Russia by YCharts

Strong Russian production is bad news for oil prices as there is simply not enough demand for all the oil produced at the moment and it is far from the only high producing country.

Iraq returns to the top
Iraq is also experiencing its highest oil production in decades. The Middle Eastern nation’s oil exports have reached levels not seen since 1980 according to the country’s Oil Ministry, with oil export terminals in the south of the country achieving record sales. As we see in the following graph, Iraqi oil production has been very volatile over the years due to its conflict-ridden past. 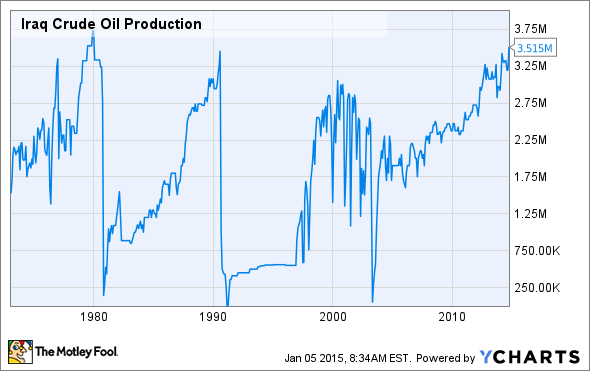 That being said, production currently continues to increase as the country enjoys relative stability to change. Despite the problems with ISIS in the north, oil fields in the south of the country are flowing at the moment, which contributes to the glut of oil currently available on the market.

Libyan oil is still flowing at the moment
Even Libyan oil continues to flow, despite the escalation of violence in the country. Last week, a fire at a major oil terminal due to fighting in the country slowed the country’s oil exports and caused the port to close. Further fighting erupted this week as a Greek-owned tanker was bombed by an unidentified military plane while anchored in Libya, according to reports. The bombing killed at least two people and could stop the country’s oil exports.

As we see in this next graph, Libya has been trying to recoup all of its oil exports since the start of its civil war in 2011. 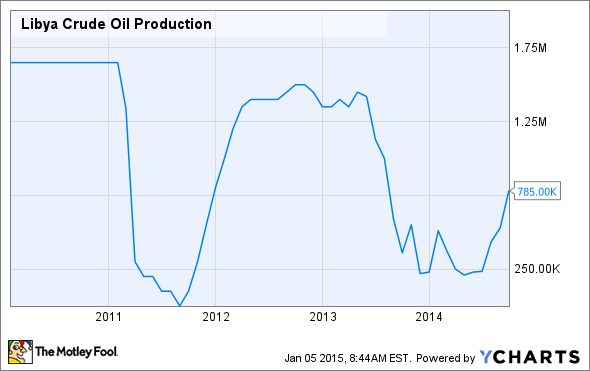 While recent oil exports had fallen to just 128,000 barrels per day, no domestic production is really needed at this time, as oil supplies elsewhere have more than made up for the lack of Libyan oil on the market. This is in stark contrast to the last time Libyan oil production was halted. As seen in this following graph, the country’s civil war in 2011 had a very notable impact on oil prices. The drop in Libyan oil production caused oil prices to rise, causing Americans to pay more at the pump a few weeks later. 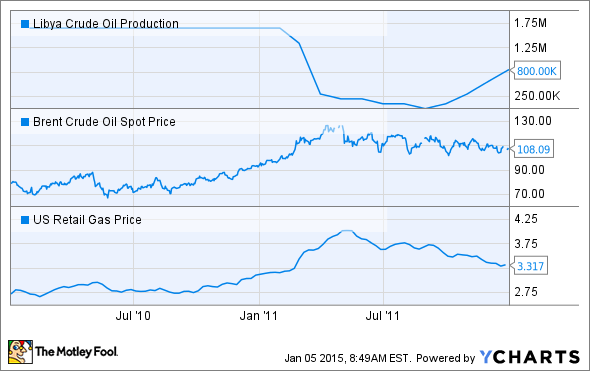 Things are different this time around, as high production from Russia, Iraq and the United States makes Libyan oil unimportant to the market. This is why oil prices are not moving even though recent fighting in the country has focused on its oil infrastructure.

Takeaway for investors
Oil prices will continue to decline until the market sees a change in the dynamics of supply and demand. Until that happens, oil prices will likely continue to fall as there is simply no reason for oil prices to rise at this time. This makes for a troubling time for energy investors, but one that should eventually pass as the oil market is used to correcting itself over time.