This week, the Energy Information Administration reported a crude oil inventory drawdown of 8 million barrels (Mbbl) for the week through January 1. to a Reuters investigation).

At 485.5 MMbbl, commercial crude oil inventories are still above the five-year average (+40.4 MMbbl) as well as above last year’s level (+54.4 MMbbl). Although the surplus is shrinking, it is still quite large (by historical standards) and the price of WTI looks high relative to current inventory levels (see chart below). 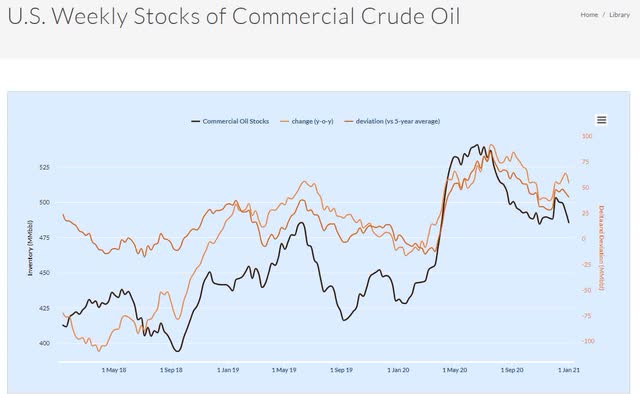 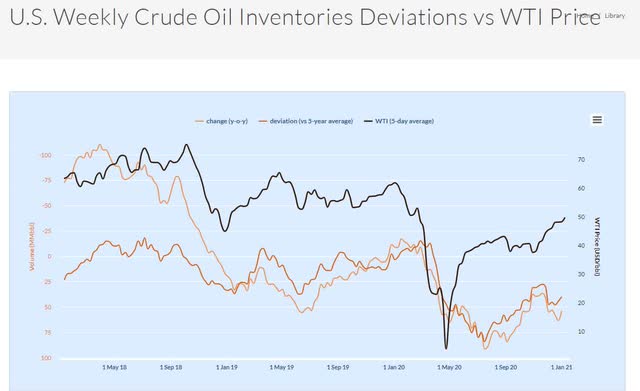 However, the market is looking to the future and there are good reasons to expect higher prices in the future.

During the week ending January 1, production was stable at 11.0 Mbbl/d. Total supply, however, increased by 0.3%, while imports increased by 0.8%. Oil consumption (refinery inputs) was up 0.6% wow, but is still down about 15% YoY (see chart below).

Overall, total demand (which is up about 17% from the 52-week low) is recovering faster than total supply (which is up only 12% from the highest low of 52 weeks).

Source: EIA, Bluegold Trader estimates and calculations. Variations and deviations (vs last year and vs 5-year average, etc.) are colored according to their notional effect on the price. For example, higher consumption should have a positive effect (green color), while higher production should have a negative effect (red color). 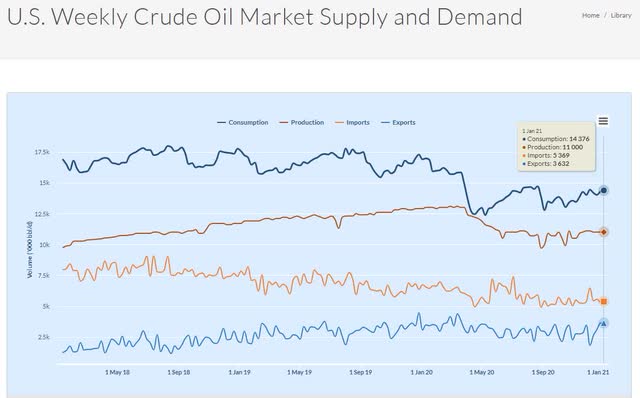 Crude oil production potential has been significantly damaged. The inventory of old wells is growing faster than the inventory of new wells, while the number of active oil rigs has decreased by around 60% year-on-year. 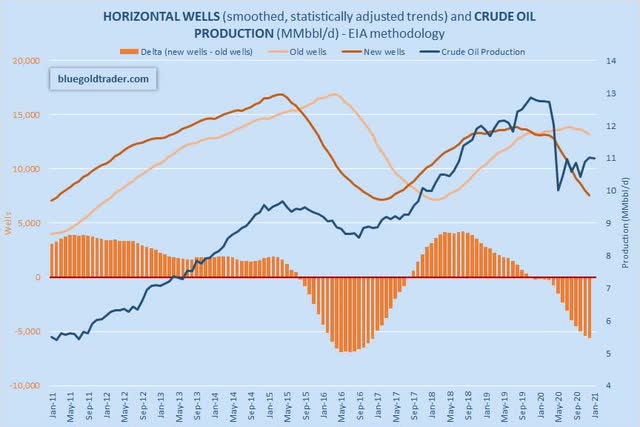 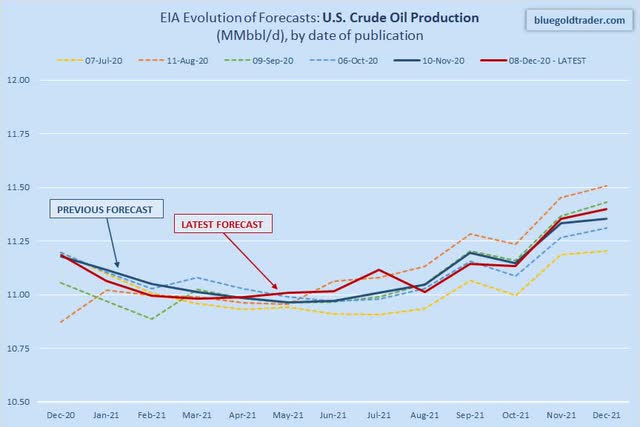 The VLCC floating storage situation has improved significantly over the past few months. Crude oil inventory in stationary VLCCs has fallen from around 141 million barrels in mid-July to just over 43 million barrels today. The annual surplus narrowed to just +3.4MMbbls (from +101MMbbls in July), while the surplus over the five-year average narrowed to +6.4MMbbls (from +94MMbbls in July). There is still a slight bullish divergence between the price level and the amount of crude oil in VLCC storage (see charts below). 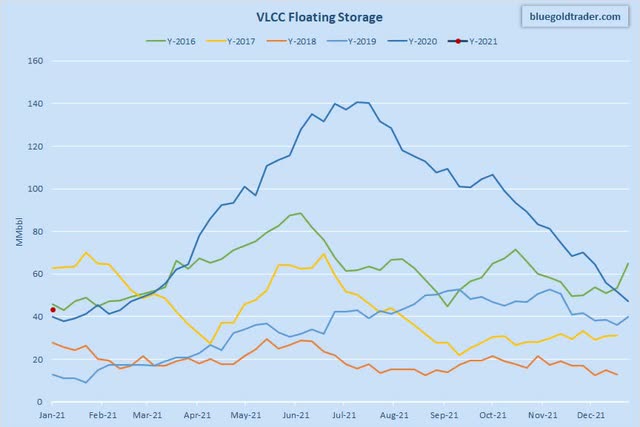 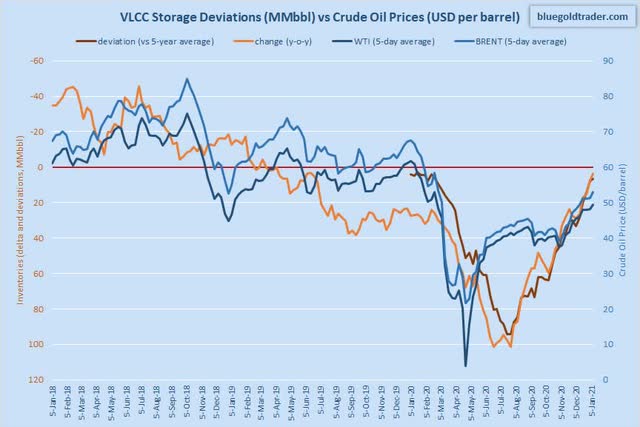 During the week ending January 8, we estimate that inventories of refined petroleum products at five major ports (Amsterdam, Antwerp, Fujairah, Rotterdam, Singapore) likely fell to 123.49 MMbbl (-2.76 wow) . The annual surplus narrowed to +16.45 MMbbl (against +20.75 a week ago).

The spread between the price of Brent (five-day average) and the stock of refined products at five major ports appears to be bearish (see chart below). 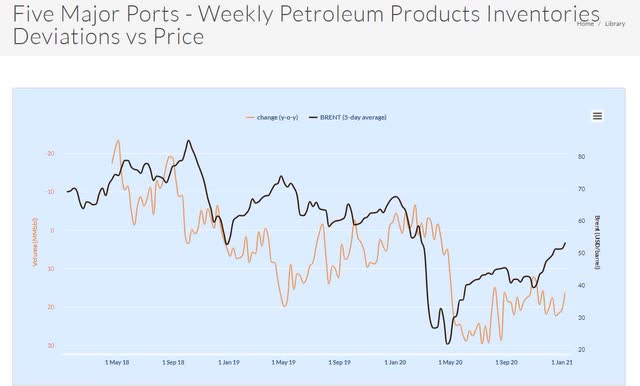 Source: Bluegold Trader estimates and calculations (based on official data)

At the end of November, the total inventory of crude oil in Japan stood at: 11,512 kiloliters (down -961 kiloliters month-on-month and down -2,110 kiloliters from the 5-year average, but up +84 kiloliters year-on-year). 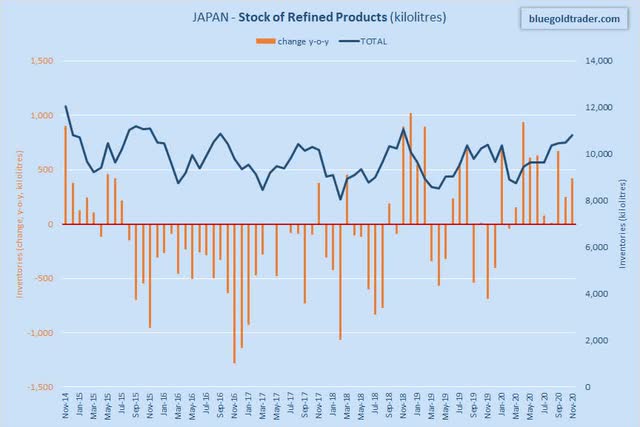 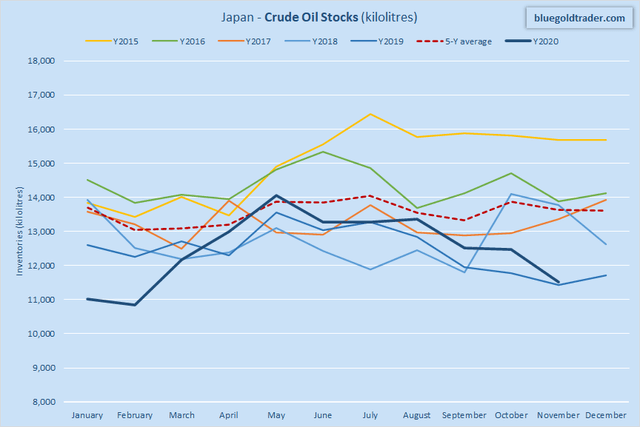 Domestic sales of crude oil products in India edged up by 0.07 million tonnes in November to 17.83 MT, but fell by around 0.65 MT year-on-year. Still, consumption is up about 80% since April’s low. 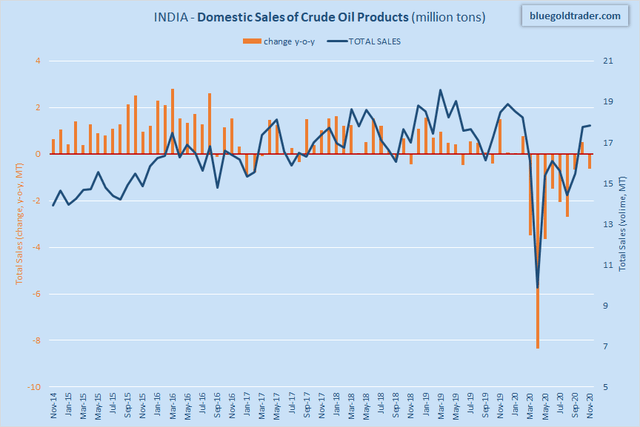 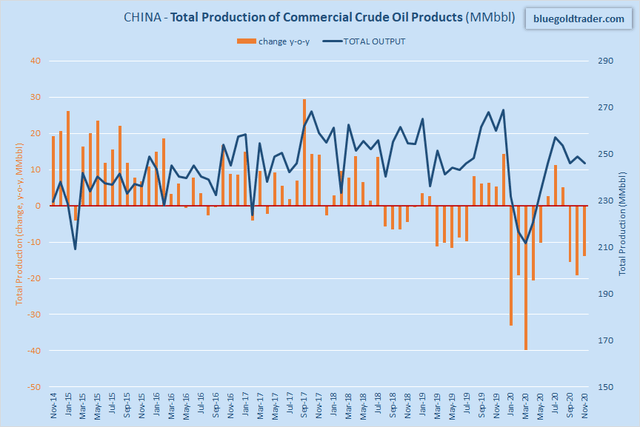 The schedule spans between demotion and contango as the market alternates between periods of undersupply and oversupply, making spreads rather than spot prices the most useful indicator of market equilibrium.

Downgrade (positive spread – see charts below) is associated with periods of undersupply and low inventory, while contango (negative spread – see the table below) is associated with the reverse. In other words, the forward curves become retrograde when supply is low; conversely, contango tends to occur when there is excess. The discount incentivizes inventory holders to release them due to the prevailing short-term mark-up price. Contango, on the other hand, incentivizes storage facility owners to increase inventory, thereby alleviating the supply glut. Contango, or when the Brent/WTI futures price trades above the fast price, generally encourages traders to buy options to hoard crude, which could lead to higher inventories.

Brent and WTI oil futures are backwarded (based on six-month calendar spreads). Offset implies that crude oil inventories should decrease (over the next six months). 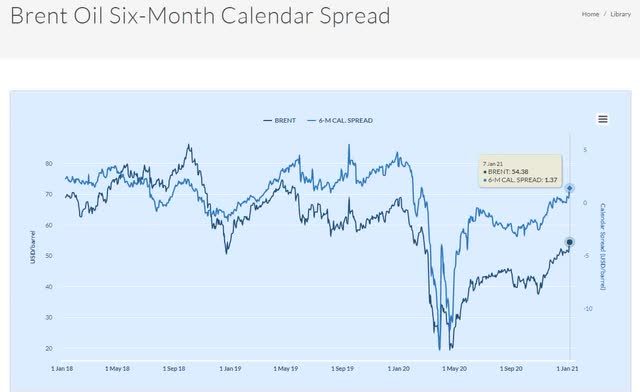 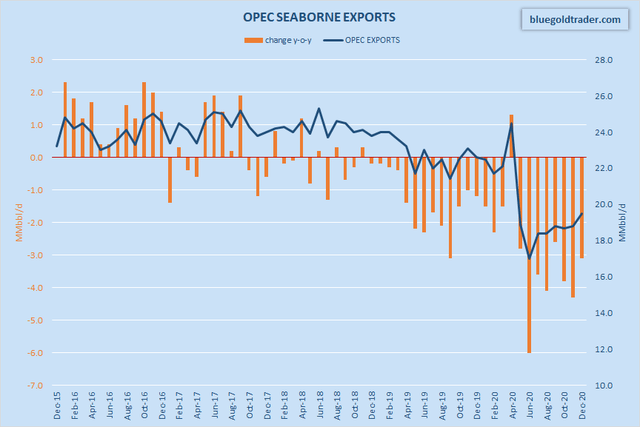 Strategically, we would prefer to go long, but we believe Crude Oil is slightly overvalued in the near term. A bearish divergence on the hourly RSI signals the exhaustion of the rally. An uptrend line also indicates an upcoming correction. Therefore, we opened a minor short position in WTI Oil. Stop loss: 52.01. First profit level: 49.48.